So recently I learned something very sad about myself. I learned that my body doesn’t seem to respond very well to dairy anymore. I cut out milk and replaced it with almond milk years and years ago, I think when someone told me it was mostly mucous and then I couldn’t stop imagining I was drinking cow mucous. And I actually started to prefer the taste of almond milk after I got use to it. But every now and then I love me some good stinky European cheese and ice cream is…I mean it’s ice cream. It’s ICE CREAM. I love making a healthier NICE cream in my Vitamix (see my Cinnamon Macadamia Nut recipe), but sometimes it’s just not the same. So having to find alternatives was depressing. I didn’t like soy. I tried coconut ice cream and found that every single flavor tasted heavily like coconut and it was overpowering. Don’t get me wrong, coconut is delicious but sometimes you want a flavor that isn’t coconut, ok?

I saw some vegans on IG mention cashew milk ice cream, and many claimed it was the best, even over Ben & Jerry’s non-dairy line. So I made a mental note to try it but I never seemed to find it anywhere and I moved on. 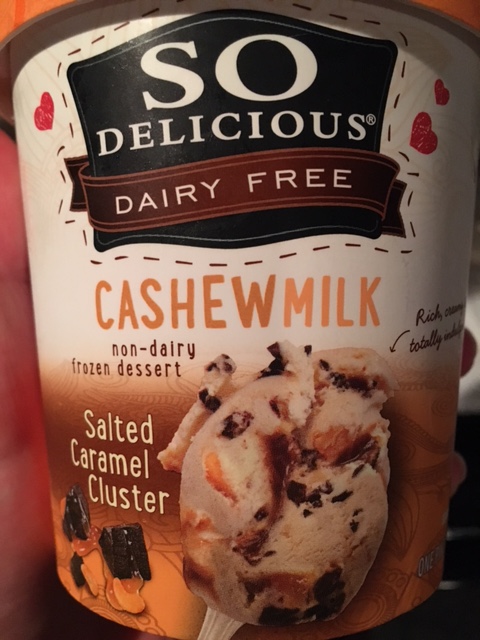 Then one day it was at my local Whole Foods. And it was even better than I was really REALLY hoping it would be. Granted I haven’t tried any other flavors but I don’t know why I would want any other flavor when one called SO Delicious: Salted Caramel Cluster exists. The consistency and texture is by far the closest to real ice cream i’ve tried so far, I love the  rich nutty taste of the cashew milk and this flavor is to die for. If you are looking for an ice cream fix but dairy makes you feel like dying afterwards, RUN to Whole Foods (or somewhere else that carries it near you) and thank me later. 🙂

I would love to hear from you. Please feel free to email me directly at KitchenAudacity@gmail.com